Here at Macoscope, Community is inscribed among our Core Values. Seeing that we don’t have either a receptionist or a front desk, and our office is basically a big house, opening the front gate for visitors and deliveries quickly grew into a problem. To open it, we needed to press a button near the main doors, and the inconvenience of having to step away from our work to walk up to the door multiple times a day terribly annoyed us. What else could we have done but put our heads together, like a true Community would, and try to solve it with a little bit of technology that we’re so good at!

Well, what if we could check out who’s at the front gate and open it directly from our computers? We’re developers after all, aren’t we?

Relay is a device that allows us to manipulate the flow of electrical current using signals from the Raspberry Pi. We need to be able to interact with electrical current in order to simulate pushing a button like we normally do to open the front gate. Thanks to the DIY movement there a lot of relays available for Raspberry Pi, so we have that going for us. In our case, a simple single-channel relay with opto-isolation (safety first, kids) will be enough.

Obviously, we want to know who’s out there ringing the bell. Is it the postman? Has our weekly delivery of juices arrived? Or maybe one of us forgot their keys? Once again, the DIY and IoT movements came to our rescue with the Raspberry Pi camera module. It’s easy to connect to the Raspberry thanks to a dedicated interface and it works out of the box. However, there’s one more thing we need to take care of, and that’s video streaming software. That’s where motion comes in — it’s great piece of open source software with the ability to detect movement, but we’ll be using it only as a streaming server. Motion provides a http service with a mJPEG stream, so it works with all major modern browsers.

The picture above is a simplified diagram of how the entire setup is connected together.

Thanks to the mDNS protocol, we don’t need to remember what the IP address of our Raspberry is. A relay, a couple of meters of cable, 15 minutes with a screwdriver, a multimeter, and a sip of Scotch, and we had our setup up and running. Lucky for us, most Linux distributions come with Python built-in, and raspbian (it’s Debian GNU/Linux ported to Raspberry Pi if you’re not familiar with the name) is no different. Believe it or not, that basically covers most of our needs. Python is great for creating Web-based (we used the Flask framework) interfaces in a flash, and we also used python-gpio to trigger the relay:

So what’s the flow when someone rings the bell? Everyone within earshot can go to their browser of choice, enter the URL to see the video stream and click “Open” to remotely open the gate.

We are a software development company, after all, so we quickly put together an app that sits in the menu bar of OS X and offers the same capabilities that the Web interface does, that is checking out who’s at the gate and opening it remotely.

It’s open sourced and bundled with the code that is supposed to run on the Raspberry, so it’ll run out of the box if you decide to follow a similar setup.

We will be making some improvements to the app over the coming months, including authorization via Google Apps OAuth to prevent malicious requests to the endpoint responsible for opening the gate, even if it’s available only on the local network.

Setting Up a Smart Home Using a Raspberry Pi

Thanks to platforms like Raspberry Pi it is possible to make your office or home smarter.

Thanks to the IoT and DIY movements, as well as the wide adoption of platforms like the Raspberry Pi, it is now possible to make your office or home smarter fairly easy using technologies easily available to the majority of good developers.

Got inspired? Email us and see how our design and development services can drive business value for you. 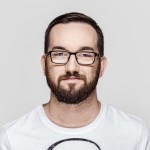 Mateusz
Kozak Backend developer. Started out in the IT industry as a network and systems administrator over 10 years ago, but the lack of proper tools quickly pushed him to programming. Simultaneously took up an interest in microcontrollers and electronics. Over time he became a full-blown Web app developer with a strong focus on backend and server solutions.

END_OF_DOCUMENT_TOKEN_TO_BE_REPLACED

Grand Central Board for the Apple TV