If you’re a careful reader of our blog, then you probably know how the idea of Swift Warsaw came to life and that four of us helped put the event together. Here’s what it took to make it happen.

At first, it was just an idea we were toying with – Łukasz mentioned it when we were at Swift Crunch. We were still talking about it in the car on our way back from Krakow, but nothing actually came of it. Truth be told, it was Łukasz that got the whole thing off the ground – when we noticed he created a Meetup group and the @swiftwarsaw Twitter handle, we immediately reached out to him.

Couple of days later, and we’re all sitting at the table at our office brainstorming. When we were leaving 3 hours later, we had a long to-do list, a github repo containing that list, and a rough idea of what we wanted the event to look like. We quickly agreed on how long each of the talks should be (15 minutes), how many of them should a single meeting have (it seems that 3 is the sweet spot), and we even had a rough draft of an agenda.

And then reality kicked in.

Going in, we all expected that organizing a meetup would be a major time-sink, no-one was insane enough to think we could do it over a couple of lunch breaks. The reality of how much effort it takes to create such an event still overwhelmed us.

Turns out that organizing an event takes a lot of meetings. (Keep in mind that we’re developers, so any number of meetings that’s larger than 1 is “a lot” to us.)

After the initial “Hey, let’s do this!” meeting, there were “…okay, so now what” meetings, there was a talk rehearsal, we had to figure out our budget, we had to come up with ways to delight people who’d show up (homemade lemonade turned out to be a big hit), we had to… Well, there’s a lot of little things that need to be taken care of. Having a presence on Twitter and Facebook is almost a must these days – a Meetup group and a website are also really useful, but setting it up (and updating it!) takes time.

I can only imagine the nightmare it would turn into if we had to book a venue – having a big, roomy office space is really useful in moments like these. But you still have to figure out exactly where in the office will the talks take place, devise a plan to make sure none of our equipment gets damaged or stolen, plus a million other things you need to take care of.

Thankfully, we didn’t have to do everything by ourvelves – our very own Agata and Klaudia were immensely helpful, I don’t think it’s an exaggeration to say that we couldn’t have done it without their help.

Oh, and that rough draft of the agenda we mentioned? It had two talks by the organizers on it. Only later did we realize how much time and energy that takes.

I mentioned before that we had a talk rehearsal session; we haven’t originally planned on it, but as the day of the event loomed ever closer and some of us (me) started to freak out at the prospect of public speaking, we swiftly decided we want to have one.

It was one of the best decisions we made, and afterwards we were quite surprised to hear that it’s a rare occurrence before meetups like ours. Sure, if you’re in a position to invite seasoned speakers it would be downright rude to suggest to them that they need to come down to rehearse their talk, but if you aren’t (and we weren’t) it’s really helpful. I feel our talks would have really suffered if we hadn’t had the opportunity to review each others’ work.

So, how did the event itself turn out?

We had a liberal RSVP policy, so we don’t have an accurate headcount, but we believe around 70-80 people interested in Swift showed up. Considering that our original estimate was 30 people at the maximum, we think we can call it a success. The after-party lasted into the wee hours of the morning and we’re really happy about the number of people that decided to stay after the talks to network a little bit.

Speaking of the talks – there were three (all were recorded), and they ranged from the introductory “Swiftroduction – Introduction to Swift” by Łukasz Kuczborski, through the intermediate-level “Swift InFlux” by yours truly, and all the way up to “Swift DSL Toolbelt” by Krzysztof Siejkowski.

During the prep work for the event we somehow found a real Chinese gong in the office. Hitting it as hard as we could was a great fun, but also a clear sign to the attendees that they should wrap up their conversations and assemble for the talks.

As happy as we are with Swift Warsaw #1, we’re perfectionists and we know there’s still room for improvement. We’re in the middle of fixing some of the most glaring issues: poor sound quality, lack of clarity as to the language of the talks were to be given in, insufficient supply of soft drinks, and a few other smaller things.

If you attended our first meetup and have a piece of feedback for us, we have a handy form for you.

I’m happy to announce we’re already planning the second Swift Warsaw meetup. It’s going to take place on the last Thursday of the August (notice a pattern here?), that is August 28. Macoscope will once again host the event (and the afterparty!), and the doors will be open on 18:30 (the talks begin at 19:00 sharp). Join the facebook event or the meetup group or just show up!

Our $30 Paradigm Shift - 3 Months with a Recognition Program at Macoscope
The Swift Community in Poland: a Developer's Diary 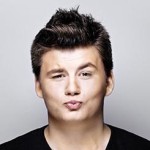 END_OF_DOCUMENT_TOKEN_TO_BE_REPLACED

Grand Central Board for the Apple TV